Looking for software engineering or DevOps services? Our parent company has you covered
Learn more 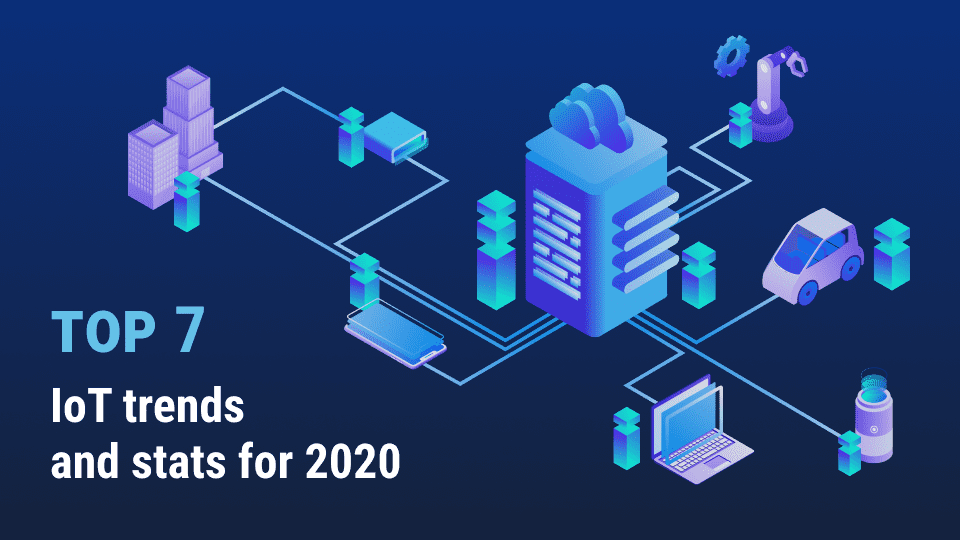 7 IoT Trends and Stats That Will Impact Businesses in 2020

As one of the key constituents of modern digital transformation, IoT keeps making great progress in the enterprise area. In their recent IoT market forecast, Gartner expects the combined commercial, industrial and automotive Internet of Things market to grow to 5.8 billion endpoints in 2020, a 21% increase from 2019. Also by their estimates, about 4.8 billion endpoints will be in use in the enterprise field by the end of 2019, up 21.5% from 2018.


These growth numbers translate into some great business opportunities in such segments as utilities, building automation, physical security, manufacturing and others. Consider the following table summarizing their research findings.

Apparently, the IoT market is far from saturation with new connected devices. Gartner’s projected revenue from endpoint electronics is almost $400 billion globally for 2020, and that means a huge impact on shaping the entire technology market. Our 7 IoT trends for 2020 will help you have a clearer picture of where the industry is headed.

The good news for IoT companies is that the current growth numbers of the IoT market doesn’t seem to wane anytime in the near future. Another report by Fortune Business Insights lays out a very positive projection: the global IoT market is estimated to reach $1.1 trillion by 2026, growing at an average rate of 24.7% from 2018, when it was estimated at $190 billion.


There are several factors contributing to this rapid growth. First, IoT offers practical reliable solutions for every line of business and has clear benefits and predictable ROI. It has a strong footprint in all major industries, among which the leading are such pillars of global economy as Financial, Manufacturing, Telecom, and Healthcare.

Second, the IoT upswing is fueled by the adoption of other technologies, including cloud-based applications, artificial intelligence (AI), and machine learning. These solutions help companies to more effectively utilize the data collected by the means of IoT.

Finally, IoT is now a mainstream technology that is easy to use, scale, and support. IoT hardware is now a commodity accessible for the smallest of businesses, modern IoT platforms offer flexible setups for each specific use case, and common connectivity standards have shaped out over the past few years to bring different device vendors on the same page.

Cloud computing infrastrastructure is the brain department for the enterprise-grade IoT. That’s where all the data integration, storage and analytics happen, without which IoT doesn’t make much sense for enterprise users. At this year’s Hannover Messe , which is the #1 global industrial trade show, IoT and cloud had equal shares-of-voice in the media, lagging only behind the overly hyped advent of 5G. While the 5G industry has a number of challenges that still need to be overcome, IoT and cloud companies were the ones who stole the show.

The entire Industry 4.0 paradigm is actually founded on three big whales - IoT, cloud, and smart data. IoT-enabled devices and sensors transmit their operational data to cloud-based servers, which is then transformed into meaningful information, stored, and used for operational decision making. Moreover, cloud connects multiple industrial automation applications, devices, and users into a single ecosystem to create a closed-loop production facility. As a result, cloud becomes the answer to one of the two most critical issues with IoT implementation, namely technology integration (the second one is security).

As a bottom line, companies will be, definitely, making greater progress with IoT in 2020 by combining it with the modern cloud services and infrastructure. Thanks to the cloud, IoT gets easier to deploy and run at scale. It also get empowered with cloud-based AI and analytics. On the technology side, we’re going to see definitive adoption of flexible cloud-native architectures, such as microservice-based, as the industry’s best practice among IoT platform vendors.

Popular IoT platform vendors will continue to expand their offerings with the aim to address their clients’ needs end to end. While core IoT device management and data collection functionality has been extensively implemented by multiple vendors, they will now focus more on such aspects as hardware, data analytics, flexible dashboards, open architecture, usability, and valuable integrations. Having a single-source solution that encompasses different aspects of IoT in one package can potentially help businesses avoid interoperability and performance issues as well as simplify operations.

KaaIoT, the company behind the Kaa IoT Platform, has also tuned in to the common need of our customers and Kaa Community and recently announced a modular-design KaaIoT Gateway, which can be assembled to target specific use cases, performance requirements and connectivity options. It comes pre-integrated with the Kaa IoT Platform or Kaa Cloud to enable you to connect and start managing your remote devices without any hassle at all.

Overall, new advancements in IoT platform technology, including the trend for growing single-source ecosystems, will make more companies lean towards the buy option in their build vs buy considerations. In-house platforms will be increasingly lagging behind in their capabilities and lose their lustre as a viable alternative for IoT platforms from trusted vendors.

Convergence of PaaS and SaaS IoT

When selecting an IoT platform, flexibility is usually as important for business as the cost of ownership. It answers the question of how easy you can accommodate an IoT platform to your specific use case, workflows, devices, and legacy applications. It’s not a simple yes/no answer because every vendor approaches flexibility differently. In broad terms, software-as-a-service (SaaS) IoT offerings represent one end of the spectrum, where you can get started in two shakes initially but may have very limited customization options in terms of everything, from the user and device management to dashboard personalization to deployment models.

On the other end of the spectrum, there are platform-as-a-service (PaaS) IoT solutions that enable you to access all the customization you can possibly have to create the best fit solution for your business. The only setback is that using PaaS may require good skills in IoT development and take more time to get the job done than with SaaS. That’s why, IoT vendors try to bridge the two ends by offering a cloud-based SaaS-like environment that takes care of routine configurations but also allows for rich customization and offers user-friendly visual interface to minimize the amount of coding while configuring the system. Such self-service IoT cloud platforms is where PaaS and SaaS concepts meet.

However, there may still be some loose ends on the edges of this union. One example is freedom of the IoT platform deployment and redistribution. SaaS solutions work perfectly well in the provider’s public cloud but what if you want a self-hosted private environment? And what if you’d like to redistribute the platform’s functionality inside your own products or cloud services? This is where PaaS wins the flexibility run hands down. So, make sure you got the right mix of SaaS and PaaS when selecting an IoT platform.

Figuring out what to do with IoT data

In 2020, we expect to see greater emphasis on IoT data analytics as companies will have the bigger portion of their IoT infrastructure and connectivity challenges resolved. We also expect that a large number of PoC-stage IoT projects scale up into production and focus on fine-tuning optimization algorithms and data analytics pipelines. The opportunities here are limitless and go beyond remote control and management capabilities. IoT data collected from the devices will enable self-diagnostics, self-healing, and performance optimization with limited human supervision. As AI and machine learning technologies further advance, IoT-powered devices acquire even more ways to boost their intelligence

The need for further convergence of IoT and data science is also pinpointed by the Leading the IoT report, from Gartner. It warns that through 2020, a lack of data science specialists will inhibit 75% of organizations from achieving the full potential of IoT. Figuring out how to best utilize loads of IoT data is the next big problem facing the enterprise IoT sector. It is also why IoT vendors with strong analytics portfolio, more flexible dashboards, and straightforward integration with modern analytics tools will have a bigger say on the market.

High hopes for AI and 5G

We expect that in 2020 such cutting-edge technologies as artificial intelligence (AI) and 5G connectivity will start making noticeable waves in IoT. What they have in common is that so far their implementation was limited to some very specific use cases and considered by many as a luxury whose maintenance cost still outweighs its business benefits. However, it seems that the things will get rolling soon.

Bloomberg reports, that China has recently launched the world’s largest 5G mobile phone network, including all of its biggest cities. Operators in the US and South Korea also debuted with 5G earlier this year. Europe, even if slower than East Asia and North America, will be onboard starting 2020. 5G availability is set to take the IoT to a new level and unlock more opportunities for a wide swath of industries.

The key benefits of 5G include lower latency (submillisecond levels), greater capacity that allows for high-density, large-scale IoT networks, and improved reliability. These features will enable companies to invest more into IoT applications that process huge amounts of data in real time and/or in mission-critical settings. According to IoT Analytics, the following 7 use cases represent the highest potential in the next 5 years:

As to AI, it has made some good progress already. It is seen as a game changer technology that will in time enable IoT devices to self-diagnose, predict outcomes, and deliver better insights for users. AI and Machine Learning have been implemented as part of healthcare, manufacturing, smart city, surveillance and other use cases where systems can be trained on vast sets of data to get continuously better at understanding their context and recognizing patterns. Combined with the upcoming 5G adoption, AI will be a major driver for autonomous IoT ecosystems, from self-driving cars to collaborative robots to urban management systems.

Among our IoT trends for 2020, security is not exactly the new kid on the block. It has been a perennial issue for IoT adopters since the early days and will remain as big a priority at the start of the next decade. Granted, the vast majority of basic vulnerabilities in IoT devices has been successfully addressed over the years. But there’s still room for improvement.

As reported from the recent DerbyCon security conference, in Louisville, Kentucky, security specialists urge IoT device vendors to offer greater self-check capabilities within their products, such as advanced logging features and tools to investigate possible security breaches. They stress the importance of focusing on timely detection of malicious attacks - since no IoT system can be fully secured - in order to minimize possible damage.


Security is also a real problem when it comes to legacy devices and commodity hardware for IoT. Not every device manufacturer puts enough effort into security features, especially if it’s a part of a whitelabeled IoT solution. Businesses who order such solutions may not be fully aware of possible security risks they expose themselves to with a few weak links in their IoT ecosystem.

On the bright side, IoT software security, including IoT clouds and platforms, continues to improve and is seen as one of the key competitive differentiators by technology vendors. That makes everyone win in the end, except, hopefully, IoT hackers.