How IoT and Blockchain may streamline transition to digital healthcare

There is a vision of new historical transformation coming in healthcare. Driving it are the world’s biggest technology companies, which have already started to introduce us to the digital future of medical services. That should mean better diagnoses, empowered patients, lower costs, and shorter R&D cycles for life-saving medication. By changing the way that healthcare providers can access, use and share medical data, technology is poised to fuel enormous synergy between every actor in the global healthcare ecosystem.

Electronic medical records were the first step towards data-driven healthcare but now the digital disruption takes a truly audacious aim – collecting all possibly useful health data on the broadest scale and making it accessible for immediate and long-term use by patients, doctors, and scientists. The first part has been effectively tackled with the help of the IoT, an umbrella technology for connected medical devices, wearables, and body sensors.

What still remains obscure is how to bridge separate data silos of healthcare organizations and enable secure access to their medical data. That’s where blockchain may play its brightest role so far.

From doctors to data with IoT 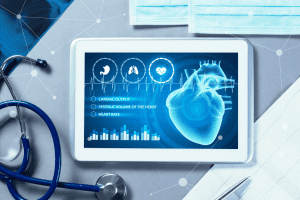 Traditional healthcare used to function mostly within a designated clinical setting – patients visit their doctors, take clinical tests, receive treatment. At other times you were left to keeping up with the prescribed medication routine, healthy lifestyle, and regular check-ups. On practice, all of these offer little insight into patient’s health dynamics on a continuous basis, resulting in late diagnoses and lack of knowledge for both patient and doctor.

The radical change in collecting 24\7 health data was brought about by IoT-enabled wearable devices. More than just allowing people to monitor their own health, these devices open up several crucial pathways to better healthcare. One is more precise and timely diagnosis. For example, smart watches are soon expected to be used to detect arrhythmias, which often goes unnoticed by many people. Sweat-sensing is another promising type of remote diagnostics, which can detect early changes in specific molecular biomarkers without the need for an invasive blood test. The first prototypes are already on trials.

IoT has been also utilized for more complex medical devices, which allow collecting a broader array of medical data or even provide home-based treatment. Prenatal care belts can save tens of thousand of lives every year by continuously monitoring whether health parameters of an expecting mother and a baby are within the norm. Portable devices for home-based hemodialysis provide enormous relief for patients with diabetes. There are also numerous applications aimed at treating a range of mental conditions, such as ADHD, opioid addiction, schizophrenia, anxiety, insomnia, PTSD, depression; they have already been used to complement conventional drugs for the best results.

Most importantly, these new medical devices and applications allow healthcare organizations to have an unprecedented view into patients’ day-to-day health stats. When paired with AI on a large scale, this data can be used to provide automated medical diagnosis, suggest treatment, and identify risk factors for any given person. Continuous aggregation of medical data will offer patients (and their doctors) more understanding of their health history, while medical companies could use it to create new AI applications and improve existing methods of treatment in a much faster way.

However, the fundamental problem is that right now health systems are too fragmented to enable the uninhibited flow of information between different parties. There are also strict security requirements and the issue of trust that must be addressed with extreme diligence. It is a catch-22 situation in which greater amounts of data aggravate security concerns, which in turn inhibit the potential of data for modern healthcare. At this juncture where all conventional methods cannot rise to the challenge, blockchain may offer a radical breakthrough we all needed.

Blockchain holds the key to many doors in modern healthcare 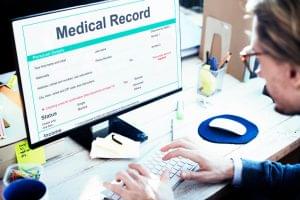 In December 2016 Deloitte, a major research firm, posted the results of its survey, which identified Healthcare & Life Sciences as a number 1 industry to deploy blockchain in 2017. As much as 35% of respondents from this sector, senior executives in large companies, were planning to invest in blockchain while fintech scored less than 25%. Associated mostly with its cryptocurrency offspring by the general public, blockchain has thus demonstrated a far greater potential, which medical companies have been already exploiting in different ways.

A major benefit of blockchain is that it can help healthcare organizations bridge traditional data silos and enable secure sharing of sensitive medical data. Not only will it improve transparency between patient and doctor, but also ensure efficient collaboration between separate healthcare providers and research organizations.

What makes blockchain stand out as a technology for secure, flexible data sharing is a combination of three factors. First, blockchain has an immutable “ledger” that you can see, verify, and control. Every record in this ledger is guaranteed to stay unchanged once it was put into it. It also ensures every transaction is verified according to the predefined rules. Second, blockchain is built as a distributed technology, which is simultaneously operated by multiple computers. This means that blockchain has no single point of failure from which records or digital assets can be hacked or compromised. Third, blockchain supports data exchange logic and agreement rules, however complex, with a flexible mechanism of smart contracts. For example, a smart contract can be used for identity management and specify different permissions for different data from the patient’s EMR stored on blockchain. Thus, doctors will be able to view what is allowed specifically for them and in the same way any other individual or organization.

There is a number of promising blockchain projects underway in healthcare, which target medical records, pharmaceutical supply chain, medicine prescriptions, payment distribution, and clinical pathways. For example, MIT-founded MedRec is creating a blockchain solution for medical history. Every time you visit a doctor and being asked about your family health history, past conditions, allergic reactions, and prescriptions, the system could answer for you with solid facts. What’s more, medical researchers should be also able to access accumulated anonymized medical metadata for their purposes, while providing computational “mining” in return.

Another initiative called the MediLedger Project aims at creating a a permissioned blockchain network for the pharmaceutical industry based on open standards and specifications. The problem at hand is how to track and trace prescription drugs to verify their authenticity in case of return and safely resell them. The project claims to have brought together industry leading companies to deliver an interoperable solution that ensures compliance to new and upcoming regulations, wards off counterfeit products, and improves overall business operations of the pharmaceutical supply chain.

How to make IoT and Blockchain work 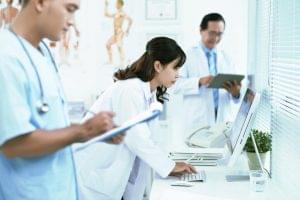 While both technologies have a vast array of their own healthcare applications, making them work together could be a clear win-win. Data is a lifeblood of modern healthcare; more reliable, accurate, and complete, it allows healthcare providers to come up with better treatment plans and improve individual outcomes. However, great times call for certain changes.

One is open standards required for blockchain solutions to operate on scale. IoT had a similar issue with different standards, protocols, and approaches back in the day. However, it smoothed itself out through practice and competition. Some approaches gained better traction and became de-facto industry standards, while others got their narrower niches. Blockchain may require more cooperation in the first place because this technology rests on a distributed, decentralized model. The biggest blockchain security incidents so far were due to attempts to centralize it or exploit loopholes in smart contracts. To avoid these pitfalls, healthcare organizations will need to become proactively collaborative and engage into joint blockchain initiatives.

A more technological challenge is how to properly connect IoT and blockchain ecosystems. Interoperability is crucial given that different blockchains, protocols, and smart contracts will be coexisting within the same healthcare industry. With increasingly diverse data contributed by connected medical devices, blockchain platforms will need to evolve to handle interoperability and data diversity of the IoT scale.

At the same time, IoT vendors and platform providers will be asked for more flexible data management capabilities – healthcare providers need a highly adaptive IoT backbone to use their smart medical devices in joint blockchain projects. If their effort to build trust on an immutable blockchain ledger is to succeed, they will have to upgrade their IoT technology to tackle maximum data diversity.